Vick’s Corner was started in 1930 by Layton C. & Edna M. Vick with a small hamburger place and the original station with living quarters above the station. Both were located on the South side of highway # 9, the hamburger shop on the East side of what is now highway #86 and the station on the

West side of highway 86. Vick’s Place (hamburgers) was soon to expand to Vick’s Cafe and again adding a bar and dance hall to Vick’s Restaurant. Vick’s Restaurant become
very well known for three
main things–Very Good Food with a full line menu, Good Service, and the place to meet and have a lot of fun. Through these traits Vick’s became very well known through out the Midwest.

The Service Station which had a basement under the original part, also enlarged by adding a service bay area also with additional living quarters above it. The service bay was the drive over pit type with storage compartments and work area below the floor for working on the cars. Later on live bait and tackle and block ice was added. Half of the basement was converted to a live bait tank for extra bait supply. At different times there were full pledged boxing matches held behind the station and later on a trap shooting area.

Layton C. and Edna were both avid sports people and were able to muster a hunting and a fishing trip from time to time. They had five children one which passed at birth three still living. One owns Millie’s Pancake Haus in Tucson, AZ which has now passed on.   One lives and works in Garland, TX. area, One lives in Loveland, Co., and retired/works part time for a large natural gas co. and the other one owns and operates the present Vick’s Corner World.  In the 60’s highway #32, now #86 was totally re-done and traveling North on 86 the spur that goes toward Spirit Lake would go through the middle of the restaurant and the spur that goes to the West would go through the station area.   At that time Layton C. and Edna bought the farm across highway 9 on the Northwest corner. The restaurant was demolished and the station was moved to it’s present location. The farm house they had acquired had no indoor plumbing, little wiring and space heaters for heating and a dirt basement floor. The Vick’s had to revamp the house totally then deal with getting every thing revamped for the station. The station sits in the outer part of the original barn yard area. Grading, fill and extensive work was done. Two driveways were added with entrances on highway 86 and 9. 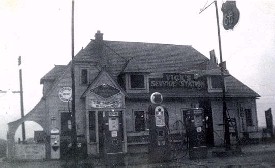 There were several wells on the farm none which were much good so a well was witched and was a good one. As you can tell the relocation was a very major project! In the mid 60’s Layton C. passed on and Edna with the help of two boys still at home ran the station. As the boys graduated and moved the eldest son Layton W. moved back from business college in Des Moines and for two years leased the station from his mother, Edna. During this time highway 9 was totally revamped and made into a four lane towards Spirit Lake with a larger intersection going to a wider two lane towards the West. Again the Vick’s were faced with very trying times as the road project took a portion of the farm and station property. All the underground tanks, signs etc. had to be moved again. The entire driveway system had to be rebuilt and due to the loss of space in front of the station a lot had to be built behind the station.

Now the East entrance is behind the building and the West entrance was 800 feet further to the West which ultimately meant a lot more driveway maintenance. The pump islands were relocated and wiring all re-done again. It took two years for the driveway to become fairly stable and a lot of work. During this time period Layton W. bought the station and grove area from his mother, Edna.  The entire grove area when Layton W. bought it was a typical old farm grove with piles of rock, old fencing rolls, machinery, accumulated junk, scrap wood piles etc., you name it was there. It took several years of work to clean the grove up to what it is now, including planting 80 plus trees, much grass seed, building two roads into the grove area.

When the grove clean up first started Darrold & Sygrid Weaver rented the cleaned end for a Antique Show and Flea Market on one weekend. The next year for two weekends, then Darrold had medical problems so at that point with encouragement from some dealers Layton W. took over the shows and went to three shows a year.
A 200 AMP electrical service with lighting was
installed in the grove area for the dealers use and later on another 200 AMP system with lighting was added.   Through promotion and quality dealers, the way the show was run and the clean grove area the Annual Antique Show and Flea Markets became well known through the entire country and has grown up to 100 dealers from up to 8 states showing. Of the two barns on the farm, the big one was torn down and the smaller one was finished off and heated and had new furniture and mdse. auctions through the years.

One late afternoon after the auction people left it burnt to the ground. That stopped the auctions but in due time a new Morton building was put up for storage.

There was one more brush with fire that could have been totally devastating. With almost no insurance and on the 50 year anniversary of the start of Vick’s Corner. Fully stocked up for the summer season and on Tuesday morning at about 3AM a serious fire was discovered at the station. Called the volunteer Spirit Lake fire department and in 15 minutes they got here!!! 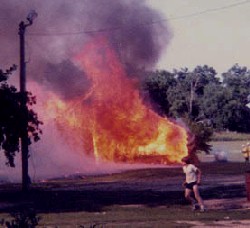 And put it out. The fire chief said afterwards if it had been 10 to 15 minutes more the building would have been burnt to the ground. Even though the building was severely damaged and most of the stock inside had to be destroyed, through Yankee ingenuity we were pumping gas that afternoon. The building was slowly restored as soon as we could and was usable again. Presently the living quarters is used for storage. The garage area of the building originally had all the studs and cross beams exposed but we finished off the interior ceiling and walls plus replaced the screw in fuses with pull handles with all new wiring and breakers.

As time progressed Layton W. kept adding new products etc. until room was non existent. A new building?  He wanted to keep the original building, after all his home was above that building when growing up so the Canopy idea came about. (outdoor cooler area). There are now full hook up Camping spots for RV’s and many spots with just electrical hook ups which are available between Antique Shows with another 200AMP system and now an additional 100AMP system that was installed in the grove area for even better facilities.(500AMPS) As demand increases we will add more full hook ups as needed At this point Layton W. has no plans for retirement but plans to keep on expanding facilities and services as best as possible. In 2001 through 2003 a large 3 car garage was built near the house and a office area that connects the house and garage was added. A new water line has also been installed towards the top of the grove area.

In the spring and on into the summer, the Vick’s have been also replacing /repairing the siding on the original station building, using both the good old siding and a lot of new siding. Due to the age of the building, the new siding had to be milled, in order to be original, as no one had that pattern in stock any more. There still is about 1/8 of the building to be sided yet, but most of it is done. A more recent improvement has been New style electronic fuel pumps and a redesigned pump island and all new signage in line with going independent so a better higher quality fuel source could be offered to the customers.

The business is owned and operated by Layton W. Vick.   Layton C. Vick II and wife Michelle, Layton W’s youngest son live near by , Own and operate Layton’s Backhoe Service , which has become very successful.  Peter & Anna Vick immigrated from Prussia/Germany in 1869 and homesteaded a parcel of land located 2 miles north and 1/2 mile west of the present Vick’s Corner location. Peter was one of a handful that named Diamond Lake Township and also was the founder of the Immanuel Lutheran Church in Spirit lake. They had two children, William F. and Mary C.. Mary moved to AK and Married a Derby. William F. moved to the railroad town of Montgomery with his wife Nancy ” Nanna”. They started a business named Vick’s Garage.

They serviced and sold cars, tractors, windmills, power plants, and much more. Nanna also run a small boarding house and William also supplied the electricity for the homes and business in Montgomery, which as the crow flies is 1 mile Northwest of the present Vick’s Corner. They had one child, Layton C. Vick.   In 1930 Layton C. and wife Edna M. Vick started Vick’s Corner. They had five children one which passed at birth. Three still living. Their eldest son is Layton W. Vick. Layton W. and first wife Patricia had one child which lives in the general area . Layton W. and his second wife, Janet had four children, one passed at 6mo.. Three are living, one which lives in Lake Park, one lives in Mo. and one lives in Switzerland. When Layton W. and Dorothy (Dee) were married, she had 2 children both which lived with them at the corner but have now gone on their own paths and presently live in Minnesota and South Dakota. “NOTICE” As of May 16, 2013, Dorothy “Dee” Elizabeth Vick (Past Names) Brown, Otis, Pesante NO LONGER lives here and has ABSOLUTELY NO ASSOCIATION , what so ever, with, Vick’s Corner World or Layton W. Vick!!!

The latest improvement has been replacing the roof of the building with steel Brite Red Kasselwood style shingles, which  simulate the original cedar shingles.  Shingles were from  www.kasselandirons.com and the installation was done by  Ramirez Roofing .   On the inside, the carpet tiles were from Snook’s  and the installation was done by  Don Delgado .